I turned in my article on Louisiana author Christa Allan. It will be in the March issue of Southern Writers Magazine. 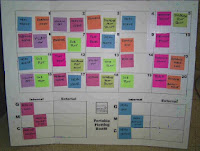 I’ve put my novel away–the one I completed and marketed to Christian publishers. I took it apart and tried to rewrite it for the secular market. It’s the one that was a finalist at Killer Nashville. Rewriting–a complete rewrite–is difficult. I lost my vision for the book. Well, actually, I didn’t lose my vision, I just lost myself. I thought I could pull out the faith elements and rewrite, but it didn’t work that way. The minute I took their faith from my characters, their Christian reasoning, praying, their Christian World View, they became different people, and then I saw the pages being gobbled up and disappearing and well … I need to step back from it for awhile. Get to know these new characters. I need to do a story board or something, gain better control of the timeline. Anyway, it’s constantly on my mind. I hear my characters conversing, I jot down things they say and do. Hopefully, I’ll get back to it soon.
In the mean time, I’d love to pursue obsessive-compulsive organizational habits. I think being organized makes a huge difference in whether one is successful or not–no matter what they attempt. On the whole, I’m not an organized person, but if you give me one project at a time, I’m organized. Make sense? Baby steps, baby steps.
I’ve started two new projects. I’m super excited about both. I’ve been thinking about a nonfiction book for about a year and making notes. I’ve finally started outlining it. Since a lot of interviewing will have to take place, I’m devising some powerful (yes, they have to be powerful!) questions for my subjects. I’ve never written a NF book. I need to learn exactly how much I should write before I query. I understand one doesn’t have to write the entire book before they can query or even sell. The research has been fun. So if any of you have experience pulling together a NF book, any thing you can share will be appreciated.
I’m also working on a novella. No market in site–just something I have to write. Oddly enough, this started out in my mind as a NF book, and then it hit me that I should write the same story but from a fictional character’s POV; a fictional character who is a composite of many characters. I’m handwriting it. At some point, I’ll start typing, I’m sure, so I’m waiting for that pull to the laptop. Right now, the intimacy of writing by hand is keeping me excited about the story. I’ve even been waking in the middle of the night because scenes invade my sleep. Don’t you love it when you’re that excited/obsessed about a subject? At this point, it’s from the male point of view. While I write, I’m very conscious of POV–trying to put myself in his/her/its place and look out at the world. I’m thinking about revising it to an androgynous point of view to make the subject matter more universal. I’ll decide about that once I start revising. Could be that from the male POV would be the more perfect love story but I want to use the POV that makes it a more powerful story. Your thoughts?
So now that you know what I’m doing, what’s on your plate? New projects or finishing up old ones? Anything you’re super excited about? Obsessed with? Worried about? Scared to attempt? Details!