I know I rant about critiques way too much, but they fascinate me. There are so many inspirational stories out there and some horror stories too. I’m surprised someone hasn’t pulled together an anthology exploring and exposing critiques.

Here’s a funny/sad story about a critique gone bad:

Once I attended a conference and paid for a critique by one of my favorite category romance authors. I read all of her books. I thought her writing style and voice were similar to mine and that I’d get some valuable instruction from her.  When I sent her my chapter, I mentioned what I felt were our similarities. NOTE: DON’T EVER TELL A PUBLISHED AUTHOR YOU THINK YOUR WRITING IS SIMILAR TO HERS–ESPECIALLY IF SHE’S GOING TO READ SOME OF YOUR WORK. That’s like telling a woman you barely know she looks like Barbra Streisand. Some people think she’s a beauty, some don’t. You have no idea how that woman will take what you may have meant as a compliment.

When I got to the conference and met with the author, she tore me to shreds. Obviously, she didn’t think my writing style was anywhere close to hers. I didn’t receive one compliment from her–not one positive, encouraging word. I paid twenty-five bucks to be insulted! She proceeded to tell me everything I could NOT do in my story. For example, she said I could not have a single man coach his young niece’s soccer team. That is strictly a no-no in our society today, she said.

Uh, say what? Single dads/uncles/men do that every day. Don’t they? Well, they do during soccer season! 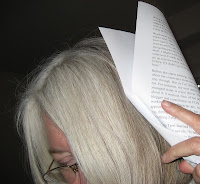 In addition to telling me what I could NOT do, periodically, she’d hit me on the head with my very own manuscript, yelling “Weenie sentence, weenie sentence.”  She expressed herself well, painted quite the picture. And I think that was the equivalent of her exclamation point.

I had a lot of respect for this author, bought all her books, and looked forward to each new release. No matter how I try, I haven’t been able to read anything written by her since this critique. The voice I heard (and enjoyed) when I read her work has disappeared and all I hear are ‘weenie sentence, weenie sentence” squeals.

Critiques can wound us, make us or break us, make us feel like a dog, but they can also make or break those giving them. You, and you alone, have the final say about your manuscript–at least until you find an agent or editor. I’ll agree that we need to get rid of weenie sentences (if we can identify them) but don’t allow some weenie critique to steal your joy or contribute one ounce of self-doubt to your psyche. We conjure up enough self-doubt on our own, don’t we?

When it comes to critiques: take what you can use, and toss the rest.