I hope everyone had a wonderful Christmas and a safe new year. We had good times, in spite of the sadness of losing my husband’s dad. He was a fun father-in-law; a good man. I’ve posted a portion of the obit, but I especially want to show you a pic of him and his brother. They were in the Navy–handsome guys. Ray (on the right) passed away in early August. He would have turned 90 in October. Travis died on Christmas Eve. Without a doubt, these two were heroes and helped make our world a better place. Not only the world–their communities, their friends, their churches, their families, their kids — and me. 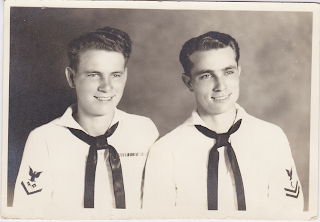 LONGVIEW — Travis Dale Ferguson, 87, went home to be with his Lord and Savior on December 24, 2011. He was born April 12, 1924, in Golden, Texas, son of the late James Thomas and Alma Amanda Morse Ferguson.
He graduated from Car­lisle High School in 1942. He was a member of the first ­graduating class of LeTourneau Technical Institute, now known as LeTourneau University, in 1948 in Longview, Texas. Travis married Flora Belle Carpenter of Arp, Texas, on October 31, 1944.
Mr. Ferguson enlisted in the United States Navy at the age of 18 during World War II, serving in the Battle of the Atlantic, European Theatre and the North African Campaign. One of the duties he had as a naval petty officer included that of a signalman using semaphores. He was later called to serve his country again during the Korean War and was stationed in Japan at the naval base at Yokohama.
He worked at LeTourneau Technologies from 1946-54. He was later employed at Lone Star Steel from 1954 until his retirement in 1986.
A longtime member of Longview First Assembly of God Church and Spring Hill Assembly of God Church, he served in numerous ­capacities at the church including deacon and Sunday school teacher.
Mr. Ferguson was preceded in death by his wife of 55 years, Flora Belle Carpenter Ferguson; all his brothers and sisters; his daughter, Amanda Susan Ferguson Wingerd; and his great-grandson, James Darcy Wingerd.
He will be greatly missed by all.

Published in Longview News-Journal on December 25, 2011