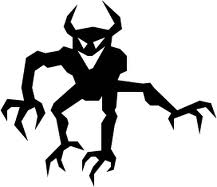 I have a character in one of my books that’s mean as the devil. When I enter this particular manuscript in contests, there’s always a judge or two that tell me he’s too mean–on the basis of a chapter or two–and that I need to give him a redeeming quality. Sheesh, you’d think there’s no such thing as pure evil in this world! Just watch the news, will ya?

Okay, okay, I understand the need for redeeming qualities, though I’m not sure this guy has any. He just doesn’t have a good heart. I also understand that if more than one person tells you something, you need to pay attention. So, I’m paying attention.

As a test, I put myself in the heroine’s point of view and I watched him for awhile. He’s her brother–quite a bit older. He moved away long before she got out of high school. Lord only knows what he’s been doing. Up to no good, I can assure you. He’s popped back into her life because their mother just passed away so yeah, he’s there for his inheritance.

Anyway, I jumped into her skin, stood at her front door and watched him. He slouched off the front porch not using the steps, walked across the dead grass, stopped and looked around, eyeing the neighborhood as if he had big plans for it. I kept watching, wondering what he was thinking. He looked down and there beside the tire of his banged up car was a little orange and white cat. I was surprised when he scooped it up, held it to his cheek. I could hear him talking to it but I couldn’t make out what he said.

So the guy does have a heart, I thought.

Wrong!
Right before my eyes, he took the cat in one hand and threw it as hard and as far as he could. I’ve never been so shocked–I mean, me the writer, his creator, was stunned–on behalf of his sister too! Believe me when I say his actions put a little fear in his sister. I didn’t cause him to throw the cat; he did it all on his own.

I was searching for some goodness and I saw pure meanness. I told you this character is evil, useless as a human being, and he plans to get what he wants one way or another. What redeeming quality can I possibly give him?