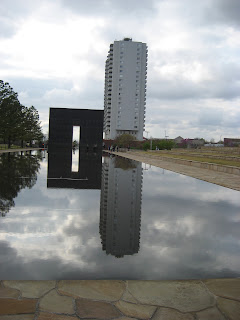 Last Saturday, we visited the Oklahoma City National Memorial & Museum that honors the victims, survivors, rescuers and all who were changed forever on April 19, 1995. I’m still thinking about it. Talk about a heartbreaking memorial. Hard to fight the lump in the throat and tears in the eyes.  According to the brochure, “the design was selected in an international competition including 624 entries submitted from every state and 23 countries. The winning design, created by the Butzer Design partnership, was chosen by a committee comprised of family members, survivors, rescuers, civic leaders and design professionals.”

And it is beautiful. Reverant. The perfect place for reflection. And tears. The reflecting pool above is what was once N.W. Fifth Street. It’s shallow and flows gently. When you walk around the area, the silence is amazing. No one speaks. 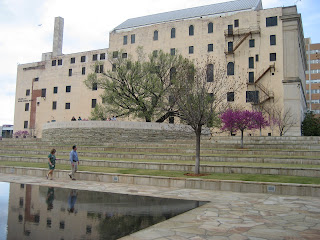 The tall building pictured at the right is the former Journal Record Building. It’s now the Museum. We didn’t go in. After experiencing the outside, I don’t think I could have looked at the pictures of the 168 people who were killed.

Below is the Field of Empty Chairs 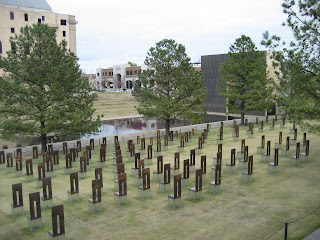 Each chair (168 of them) symbolize a life lost, with smaller chairs representing the 19 children killed. they’re arranged in nine rows, one for each of the nine floors of the building. They’re placed according to the floor on which those killed were working or visiting.  The name of the victim is etched on the glass base. The field’s perimeter matches the footprint of the former Murrah Building. It’s lined by a granite path–granite that was salvaged from the Murrah Plaza.

The picture below is the Fence, installed to protect the site of the Murrah Building. People leave tokens of love and hope on the Fence. Those items now total more than 60,000 and some are preserved in the Archives. There’s more than 200 feet of Fence that give people the opportunity to leave tokens of remembrance and hope. The outpouring of mementos is overwhelmingly heartbreaking. One letter I read said, “Dear Mom, You have four grandchildren now. I wish you could see them.” By the time I left the Fence, I wanted to fall down on the grass and sob. 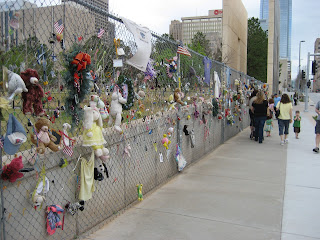 Across the street from the memorial there’s a statue of Jesus. It faces a church that was partially damaged. They erected the statue in memory and honor and at the base of it is the scripture John 11:35: Jesus Wept. After walking the grounds, feeling this place, reading the letters from loved ones, it’s not difficult to believe that Jesus is still weeping. 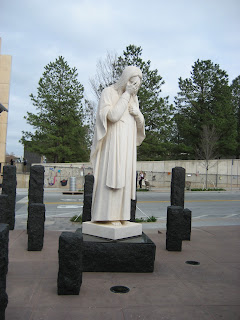 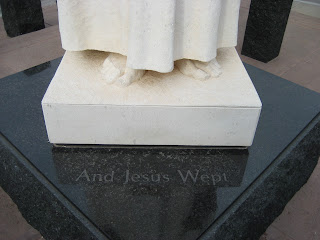