. . . because that’s where I am. Yukon was founded by A.N. Spencer in 1891. Spencer was a cattleman from Texas who turned railroad builder. He was working on a line from El Reno to Arkansas when he decided to build the town. Wouldn’t you love to look at your brother and say, “Hey, let’s build a town!” Spencer and his brother, Lewis, named the town after the Yukon Territory of Canada, where a gold rush was booming at the time.

I went to a Friends of the Library book sale yesterday.  I’ve been looking forward to this sale for a month–ever since we got here. It took hubby and me three weeks to find the library. I kept pulling up the wrong address on Main Street in downtown Yukon. When I decided to put more effort into it, we finally found it in an old grocery store. This is what it looks like now: 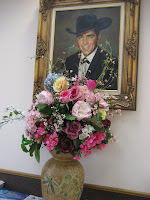 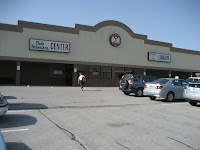 Next door to the library is the Dale Robertson Senior Citizen Center where they play games, exercise, belly dance … among other things. To the right you can see the picture they have of Dale. I thought maybe I’d check it out since I’m a senior citizen now. When I went to the book sale, I peeked inside where a bunch were playing cards. When they say senior citizens, they really mean senior-senior. I’m not there yet. I doubt if Dale attends any of their functions; if he did, I’d do a little hanging out there too.
The book sale was good and very crowded. The parking lot was packed and people brought plastic crates on wheels. I thought, “Serious shoppers in Yukon, Oklahoma.” 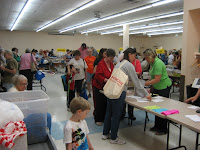 I restrained myself and only bought $10.00 worth of books–as if I really need to own one more book.  I concentrated on cook books this time and wow! I hit pay dirt. Nothing 100% vegetarian but some very expensive, clean beautiful books. I’m excited. I found two novels by Tabitha King called The Trap and Caretakers. I’ve been wanting to revisit her since I’ve only read one of her books  and that was many years ago. 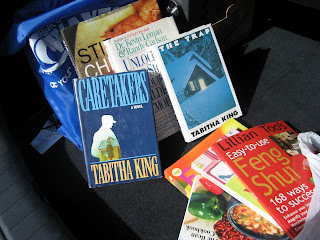 I also found a book on Feng Shui. I’ve always wanted to learn more about Feng Shui since sometimes I feel like I’m sleeping or sitting in an awkward position. Did you know you aren’t supposed to sleep with your feet pointing to the door? That’s called the death position. I probably shouldn’t have bought the Feng Shui book.
I’m excited that I found a little book called The Bean Cookbook. It’s from the Northarvest Bean Growers Association.  How about we try this simple recipe called Northarvest Three-Can Chili ?
1 – 15 oz. can pinto beans
1 – 14 oz. can diced tomatoes
1 – 15 oz. can  of corn
2-3 tsps. chili powder
Optional:
1/2 tsp. oregano
1/2 tsp. cumin
2 tsps. onion powder or one sauteed onion
My version of the mixing method: throw it in the pot, simmer for 10 minutes, taste, add more chili powder 1/2 tsp. at a time. Serve with corn bread or crackers or your favorite chips. I’ve even been known to wrap it in a soft corn tortilla and add black olives, jalapeno olives, shredded cheese and avocado. Yum!
For more servings than the 4 1/2 just toss in another can of beans! Okay, so now you know what kind of cook I am and what I’m doing in Yukon, OKlahoma.