The question WHY is important to us when we start plotting, planning and writing. It’s probably the most difficult question for me to answer. And I’m the one who always spouts to my family–“There’s a reason for everything.”

I guess that’s why I love movies. Easy to actually SEE and understand the WHY of things, the motivations of each character. Take one of my favorite old movies: Teacher’s Pet, 1958. It stars Doris Day, Clark Gable and my personal heart throb, Gig Young. 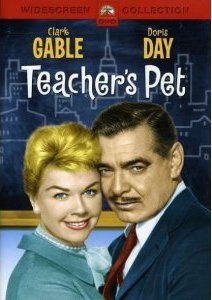 Clark Gable is James Gannon who’s the city editor of a newspaper. He’s from the old school–the School of Hard Knocks. He has no respect for journalism classes or college grads entering the newspaper business, so he’s not at all pleased when he’s told by his boss to speak to Erica Stone’s (Doris Day) journalism class. Of course, what happens? He’s attracted to her so he pretends to be a student. And that’s where the deception begins. Of course, he can’t hide his writing talent (his pride won’t let him) so he quickly becomes her prize student, one she’s determined to see find his rightful place in the newspaper industry. Remember, because of his deception, she doesn’t know he’s already found his rightful place.

Her friend, Dr Hugo Pine (Gig Young) is a wonderful ‘world-renowned egg-head’ and does an excellent job of explaining the WHY when Erica/Doris asks WHY Jim/Gable deceives her:
Dr. Pine/Gig Young says:

Here’s a man in a responsible position who feels inferior because he has no formal education …
He meets a teacher, a symbol of academic achievement . . .
By deceiving, dominating and outwitting the teacher, he receives an exhilarating feeling of superiority. . .
His battered and cringing ego emerges, victorious!

Without watching the movie, we know how quickly that victorious feeling will end when he looks into those tearful blue eyes, don’t we?
It’s so important to know where our characters come from to understand the reasons behind their actions. How well do you know your characters? Do you know their parents, how they were raised, where they went to school, their first loves, best friends,  their fears, their religion? Why? Why? Why? We even ask WHY our story needs to be told?
Come on! Teach me something about WHY.