We’re on our 4th day and D could stand for a lot of things in my world of renovation: the doors to my washroom cabinets, for example. Who knows where they are? I still don’t have any. Or D could be for desk, because hubby found one of the workers standing on top of his desk to scrape the ceiling.  D could stand for disappear because each day, hubby and I had to find somewhere to go, or hole up in the back bedroom.

For me, D is definitely Dust and Destruction.

I thought I asked all the right questions about packing things up and moving our furniture out of their way. I knew… deep down in my gut I knew it wouldn’t be as simple as he made it sound. Why didn’t Mr. Contractor just tell us we needed to put our furniture in storage? Oh, yeah, it as only going to take four to six weeks, if that long.

Tearing down walls, scraping ceilings, tearing out cabinets… we were naïve. But, Mr. Contractor told us no worry, we could just move all the furniture to the south end of the house while they worked at the north end, and vice verse. Believe me, it really doesn’t work that way. Mr. Contractor failed to tell us we would also be dealing with painters and cabinet makers and that they would have their own work schedules. But let’s get back to the dust. 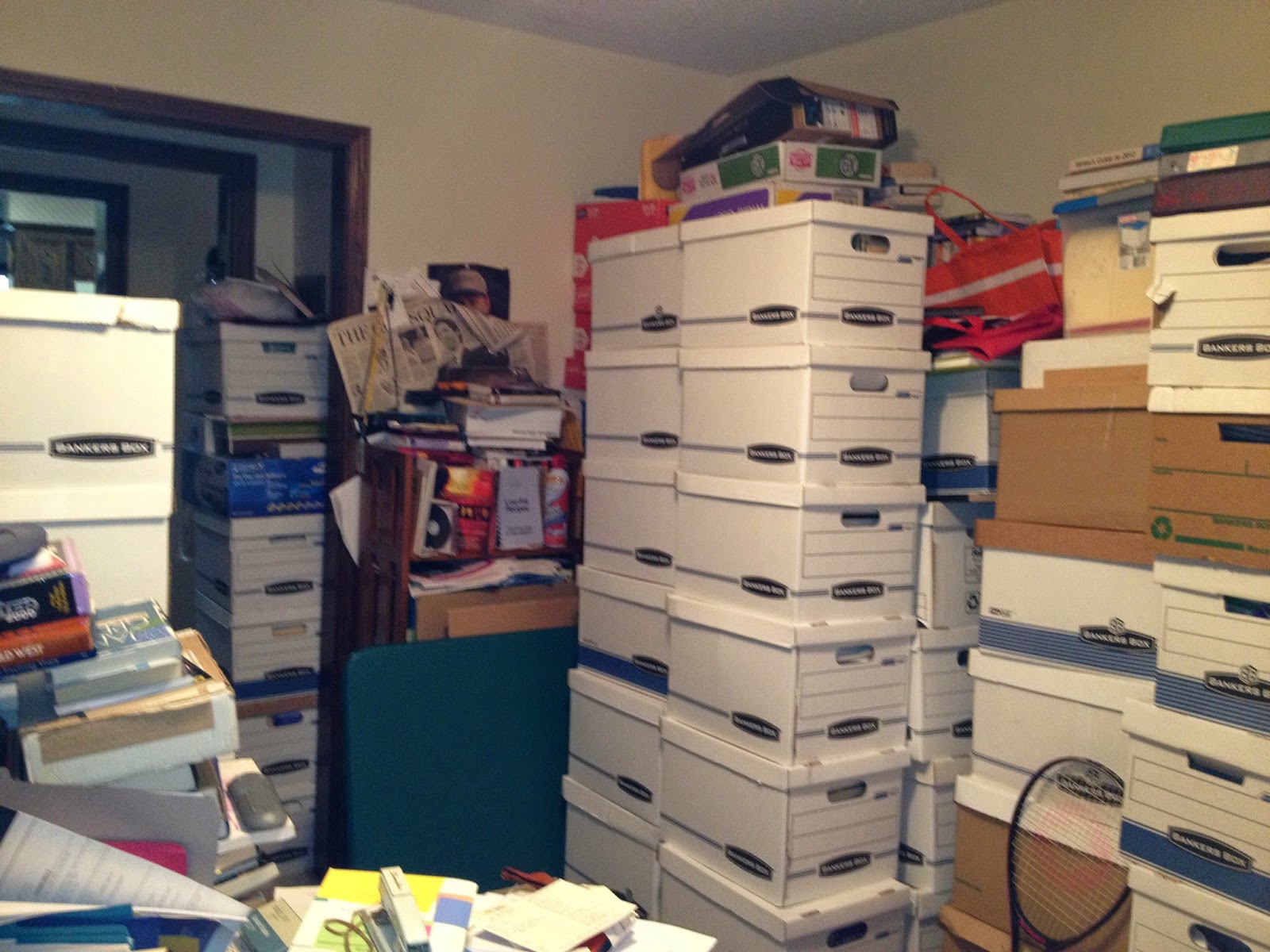 When Mr. Contractor and his team of one (his son) came in with their sledgehammers,  they were like giant termites on crack, leaving debris in their wake; the dust was horrific and it traveled. Boy, did it travel! There was no escaping it.

We’d purchased banker boxes for most of our books, and got boxes from Wal-Mart meat department for everything else. Our garage was so full of furniture and boxes, we couldn’t put our cars inside. My “office” which wasn’t going to be renovated in any way was totally destroyed because of all we packed in there. You can see it here. But, inside those boxes, everything is dusty.

Thankfully, we had some black tarps and visqueen (plastic sheeting) in our garage to cover our bed and piles of clothing. You can see below how thick the dust is on the black. Believe me, it was worse than it looks! 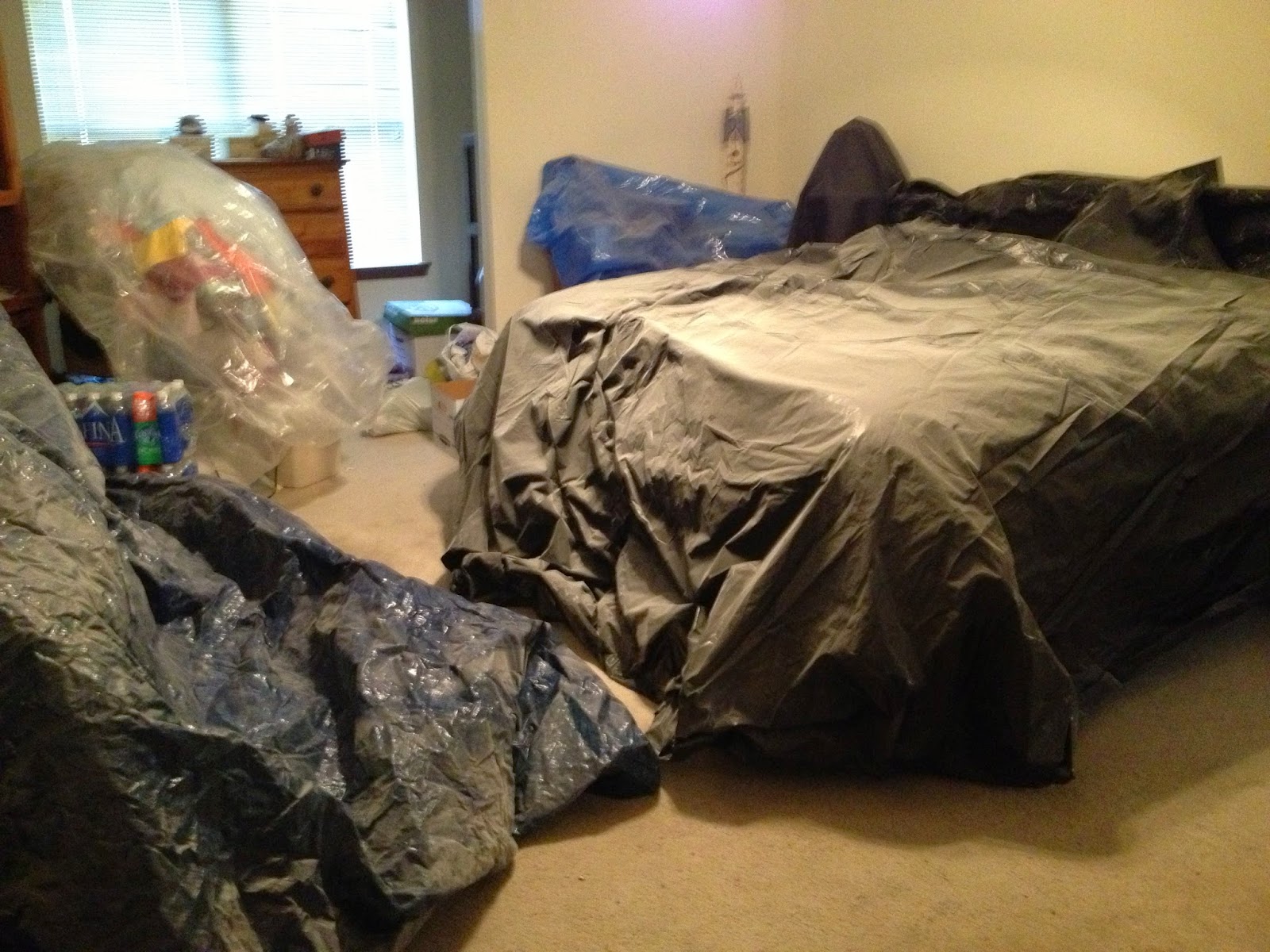 We hadn’t prepared adequately to live a year without certain things. Since Mr. Contractor told us four to six weeks we were living in the house as it was being renovated. The dust was so bad, I became hoarse and at one point, lost my voice completely. I couldn’t even squeak. And Mr. Contractor was still pulling his disappearing act.

From what I hear, all contractors are notorious for their disappearing acts because they have several jobs going at once. If you decide to renovate, you might want to ask how many jobs your contractor does at one time. Of course, whatever he tells you, add to and take from. In other words, you won’t get the whole truth. The best thing for you to do is empty your house of all furniture, move out and let him have it.

I think our presence and having all our belongings still in the house actually hindered progress. Then again, when a contractor disappears for several weeks and during that time there is no progress … well, it’s just hard to know what to do.

For those of you considering renovation, you’re in my prayers!