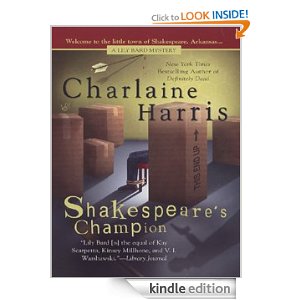 Since my dream and my daughter’s reference to the Lily Bard books, I’ve read two in the series: Shakespeare’s Landlord and Shakespeare’s Champion. Now I know why daughter thought Lily Bard had inspired my dream. Lily Bard is a maid because it’s a mindless job she can do alone. She’s always getting involved in dangerous cases, inspite of her desire to remain invisible.
Author Charlaine Harris is excellent at characterization. I like to imagine her sitting down at the kitchen table with pen and paper, writing the name Lily Bard at the top in bold letters, listing all the Lily traits. Lily is tough. No, she’s harder than tough. She can kill with her bare hands–even her feet. She seriously studies and practices martial arts.
The theme of Lily’s life is that she’s emotionally damaged and determined she will never be a victim again. She lives in small town Arkansas (chosen because it’s name is Shakespeare, and her last name is Bard) with the intentions of reinventing herself; and she has. Every action is weighed carefully, and is totally in character of one who wants to remain alone and socially unincumbered.
Landlord is first in the Lily Bard series, and though I’ve only read the first two books, Landlord is my favorite of the two. I like getting to know Lily, seeing her weaknesses and vulnerabilities. I like watching her struggle to protect herself emotionally. I like seeing her hesitantly let go, get involved in someone else’s life–always against her better judgment.
In Lily Bard, Harris has created a strong female character that is independent, blunt, solitary and very intelligent. Admirable is the right word. 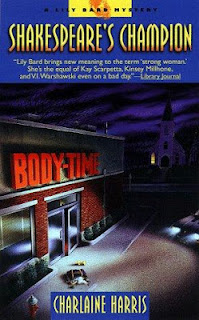 How did Harris do it? What questions did she ask herself? What came first–Lily Bard or the story? What came first–the name or the dark past? Lily Bard was perfectly constructed, and not too different from Lee Child’s Jack Reacher. If you ever want to study the growth of a series character, start with Charlaine Harris’ Lily Bard.
When you create a character, what comes first? How far do you plot a character’s life? Do you create an elaborate backstory that explains why s/he’s like s/he is? Do you examine how s/he will act/react to friends, family, threats, pets?  Do you believe taking characterization to the highest level will make your book a richer more satisfying read?
So many questions–looking for answers.