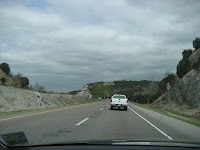 Even as we loaded vehicles and headed toward Yukon, Oklahoma, it seemed unreal. Just doesn’t feel right to be living and working here for a year. But, here’s a pic of hubby leading me across the southern part of Ardmore, OK so I’m not dreaming. I sort of liked Ardmore–even though we didn’t get off the Interstate. I like the mountains much better than flat land where we are. I missed snapping the best of the mountains. By the time I dug out my camera, we were past them. Ardmore is also the home of the Gene Autry Film and Music Festival. 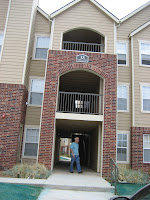 We looked around the area on Friday evening and rented an apartment on Saturday morning. Lots of prayer went into finding a place because I did NOT want to be on the 3rd floor. Well, here were are in Building 13, ground floor. We move in Friday. The first complex we went to had a three-month waiting list. The second complex had two apartments available but both were on the third floor. God does answer prayer! Building Thirteen? No, I’m not superstitious. I’m really not!

The young apartment manager told us her grandparents used to live in Lake Charles, LA. Then when we bought our bed, the guy who sold it to us said his dad works for the same company hubby works for. I’m constantly reminded how small this world is … and how transient. 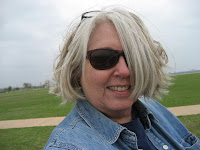 I didn’t get to the OK-RWA meeting as I’d hoped–just too much to do. Actually, I looked like a dozen kittens had taken residence in my hair and had a cat fight; yes, the wind blows constantly here. You know what they say about first impressions!  (And yes, I always wear two sets of glasses at the same time!) 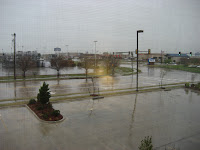 The rain came yesterday around 4:00 and we’ve been watching the weather ever since. I guess that’s what they do in Oklahoma. Counties west of us had their first tornadoes last night. The hotel people told us if a tornado is sited, an alarm will sound and we’ll need to get downstairs to a designated room. Hope they have mattresses for us to crawl under. Guess I’d better get used to this sort of thing. I’m an Okie now.